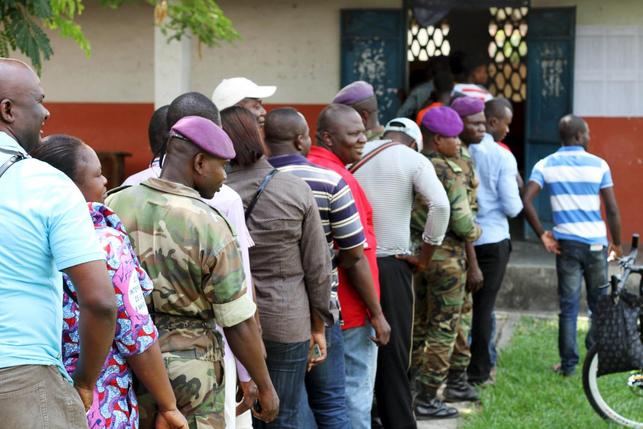 Voters in Congo Republic have overwhelmingly backed a change in the constitution that will allow President Denis Sassou Nguesso to run for a third consecutive term, the results of a referendum showed on Tuesday.

Sassou Nguesso has ruled the oil-producing nation for 31 of the last 36 years and the constitutional change makes it possible for the 71-year-old to win a further five-year mandate at an election due next year.

More than 92 percent of voters in Sunday’s referendum supported the change and turnout stood at 72 percent of the more than 1.8 million registered voters, according to figures from the electoral commission.

More than 1.2 million people voted in favor of the change, while around 102,000 rejected it, the commission said.

The turnout was immediately disputed by the opposition, which had called for a boycott of the referendum. Former colonial power France said it had no way of assessing the validity of voter participation figures.

Sassou Nguesso ruled the Central African country from 1979 until 1992, when he was defeated in a presidential election. His rule resumed five years later after his forces defeated the then-president in a brief civil war.

He is the latest African president to try to prolong his grip on power by changing the constitution. Several such initiatives have provoked violence, and at least four people died in Congo last week when security forces opened fire on protesters.

Last October, Burkina Faso’s leader of 27 years was toppled by protests while the president of Burundi won a third term in July amid violent protests. Rwanda and the Democratic Republic of Congo have also sought constitutional change.

The outcome of the referendum was never in serious doubt, given the opposition boycott. But attention has focused on turnout with the opposition hoping low participation in the vote would undermine its credibility.

“It (the result) is not legitimate. It is not credible. There is no way there could have been 70 percent turnout. For us, this result is a fantasy,” he told Reuters.

Western governments have in the past been torn between endorsing veteran African leaders who often represent stability or pressing for term limits for the sake of greater democracy. African leaders have for their part criticized foreign governments for meddling in their internal politics.

“France takes note of the referendum results in Congo. The conditions in which this referendum was prepared and organized do not permit an assessment of the result, notably in terms of turnout,” said a statement from the French presidency.

Christoph Wille, an analyst with Control Risks, said the turnout at previous similar votes in Congo was far lower, making the level of participation this time a surprise.

“The vote may not have been completely transparent and its legitimacy is hampered by the boycott. But the overall result doesn’t necessarily completely distort the voting pattern that we have seen in Congo,” he said.

a scoping meeting for the nakase project – Lake Forest, CA